About Stitch Above the Rest

Stitch Above the Rest is an award-winning window treatment fabrication and design studio serving customers in the metro Atlanta, Georgia area.

In 2003, while trying to make a few extra dollars selling custom nursery bedding on eBay, Elizabeth Gerdes founded Stitch Above the Rest, LLC. Operating out of her dining room in Marietta, GA while her children slept at night and relying on the sewing skills she learned growing up as the fourth child of twelve, Elizabeth continued to grow her business by selling custom-made items to local boutiques, craft shows, and residential clients.

In 2007, Elizabeth wanted to diversify her offerings and went back to school, at the Custom Home Furnishings Academy in North Carolina, to become a Certified Career Professional in custom window treatment fabrication, design, and workroom operation.

Surviving and thriving during the recession, Elizabeth continued to carve a path for Stitch Above the Rest, LLC to become a leader in this industry for quality, customer service, and commitment to the client. She has created an invaluable reputation that has been given five stars by her clients.

Though she has been featured in many publications and has won numerous industry awards for her unique designs and fabrication, including being named Drapery and Design Professional Magazine’s Workroom of the Year in 2014, her greatest honor came in 2017, after ten short years officially in the custom window treatment industry. Elizabeth was awarded the highest honor of her career and the highest honor in her industry, when she received VISION Magazine’s Award of Excellence and was named Workroom of the Year 2017, in addition to winning four separate category awards that same night.

Elizabeth has helped many clients take the stress out of window treatment fashions. She feels very blessed to have worked with some great clients that allow her creativity and passion to shine through, and she does not take it for granted.

Now living in Woodstock, GA, and working out of a full-size workroom Elizabeth feels her greatest asset as a small business owner is the ability to be there for her now three teenagers as they grow. With Elizabeth’s continued passion driving its success, Stitch Above the Rest, LLC has a bright future. 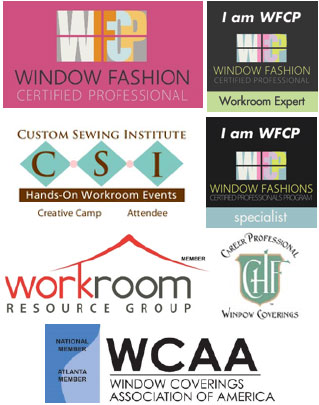 Take a tour of the Stitch Above the Rest workroom at: http://www.houzz.com/projects/865326/my-workroom-tour